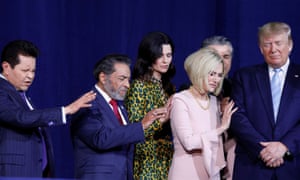 Source: ‘He was sent to us’: at church rally, evangelicals worship God and Trump | US news | The Guardian

Whenever I read the surveys from Christianity Today, or Baptist News, or The Christian Post about how young people are leaving the American Church in […]

Two of the president’s prominent evangelical supporters are literally demonizing his opponents.

“As a result, they make the job of the so-called New Atheists so much easier than it would otherwise be. All militant atheists need to do is to point people—young people in particular—to conversations like the one between Graham and Metaxas and say, “Is that the kind of faith you want to be associated with?” If that was what I thought even remotely embodied true Christianity, I would want nothing to do with it.”

Franklin Graham portrays those with whom he disagrees politically as under demonic influences.LEAH MILLS / REUTERS

, Everyone Else Is a Sinner – The Atlantic

By establishing an unholy alliance with people and values entirely contrary to what they claim their own moral and religious commitments to be, white […]

I was Born Again until nearly the end of graduate school, a sincere Evangelical who went to church on Sunday and Wednesday with my family and to Thursday Bible study on my own. I dialed for convert…

Source: The Righteous and the Woke – Why Evangelicals and Social Justice Warriors Trigger Me in the Same Way | AwayPoint

A term that once described a vital tradition within the Christian faith now means something else entirely.

Source: The End of ‘Evangelical’ – The Atlantic

The writer Ben Howe grew up in the world of conservative evangelicalism. When he looks at the religious right now, all he sees is a thirst for power and domination.