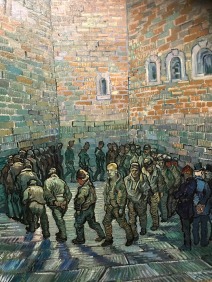 The notion that a world can be built on angry activism that is trying to go back to a lily-white nation will never happen. Yet, this seems to drive an ideology of the current Administration and its supporters. The perceived lily-white nation really has little to offer to the nation from those that want it. Sending a sizable portion of our workforce, that makes up a sizable portion of social security and other pay roll taxes out of the country in a sweep of police state action would devastate our economy and our basic moral compass. There are not replacement folks for most of these jobs waiting to take them. The white working class have been marginalized through a false work ethic while having their pockets picked by busting unions, sending family wage jobs overseas, and beating the drum that a healthy environment is not important. Large amounts of cash have dumped for decades to sow doubt on FDR policy that advocated for a social safety net. To an extent the Church has been complicit in this. That is the unreasonable right-wing fringe. It rules the right now. No one in that sad land is reasonable, or seems to care about the rule of law anymore. New Testament guiding principles and humanity have been ignored, seemingly with a deal with the devil over abortion. Far too many Representatives and Senators that used to have at least a modicum of honor and humanity have thrown it out the window for a lockstep with the current demagogue. This is the status quo. This has real fascist elements calling the shots right now. If the Central American migration tragedy is a house on fire; then the Trump and Republican solution has been to lock up the house and let the residents burn. The hue and cry of support from evangelicals for current border policy is a denunciation of the Gospel. A general amnesty is needed. Infrastructure programs direly needed around the U.S. need to employ a massive work force that shores up infrastructure and ensures a healthy environment that no longer pollutes the planet.

The left for the past thirty years has only offered Globalism and cheap prices at Walmart while wages stagnated, life expectancy has declined, and an epidemic of opioid abuse runs through working class communities–as middle class life declines or becomes non-existent in some communities. The unreasonable left-wing fringe of angry activism seems to want to enforce an equality of outcome. You can’t enforce equality of outcome. Enforcing an equality of outcome would engender fascist elements that would equal the right wing in oppression. Socialist countries that operate off a Soviet model have nothing worth emulating. I don’t want people who innovate and work their asses off and who deserve some of the pleasures of working their asses off to earn only $15 an hour. We want people who have been marginalized and must work three jobs to survive to make $15 an hour.

To the extent that the Church has been complicit in this great inequality and inhumanity not to mention the tragedy of rampant pedophilia by priests and pastors there has been a hue and cry to eliminate its tax-exempt status. Right now, as children are kept in unsanitary cages ripped away from the arms of their parents who are escaping unimaginable cruelty in Central America, that may be deserved. Billionaires and Corporations and Mega Churches need to make amends.