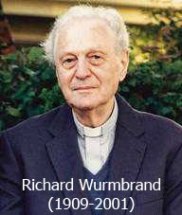 At the premier of a new play [in the era of Stalin] “Christ in a Fur”, the hall was overcrowded. The actor Alexander Rostovtsev had to play the main role. He belonged to the high circles of soviet life and was a convinced Marxist.
On the stage was a mockery of an altar. The cross on it was made of bottles of wine and beer. Full glasses surrounded it. Fat “clergymen” said a drunken ”liturgy” consisting of blasphemous formulas. In this sham church, “nuns” played cards, drank, and made ugly jokes while the “religious service” went on.
Then Rostovtsev appeared as Christ, dressed in a robe. He had the New Testament in his hands. He was supposed to read two verses from the Sermon on the Mount, then throw away the book in disgust and shout, “Give me my fur and my hat! I prefer a simple proletarian life.”
But something unexpected happened. The actor read not only two verses, but continued, “Blessed are the meek: for they shall inherit the earth” ( Mat. 5:5), and so on to end of the sermon (Mat. 7:27). It was in vain that the director made desperate signs for him to stop.
When Rostovtsev came to the last words of Jesus, he made the sign of the cross in the Orthodox manner, and said, “Lord, remember me when thou comest into thy Kingdom” (Luke 23: 42), and left the stage. He was never seen again. The communists disposed of him. Let us like this actor, forget the ugly roles imposed upon us by the world and allow ourselves to be enraptured by the beauties of the Savior’s words.
Richard Wurmbrand, Reaching Toward the Heights, Zondervan 1977